When my son just gives me "green" in answer to "what color should I wear?" this is what happens. Khaki greens, not to be confused with olives, I wasn't really surprised I had enough to do this manicure. I really have a  few others that are almost dupes as well. Poshe over.
Also a gratuitious cute baby pic, my granddaughter at 14 months. 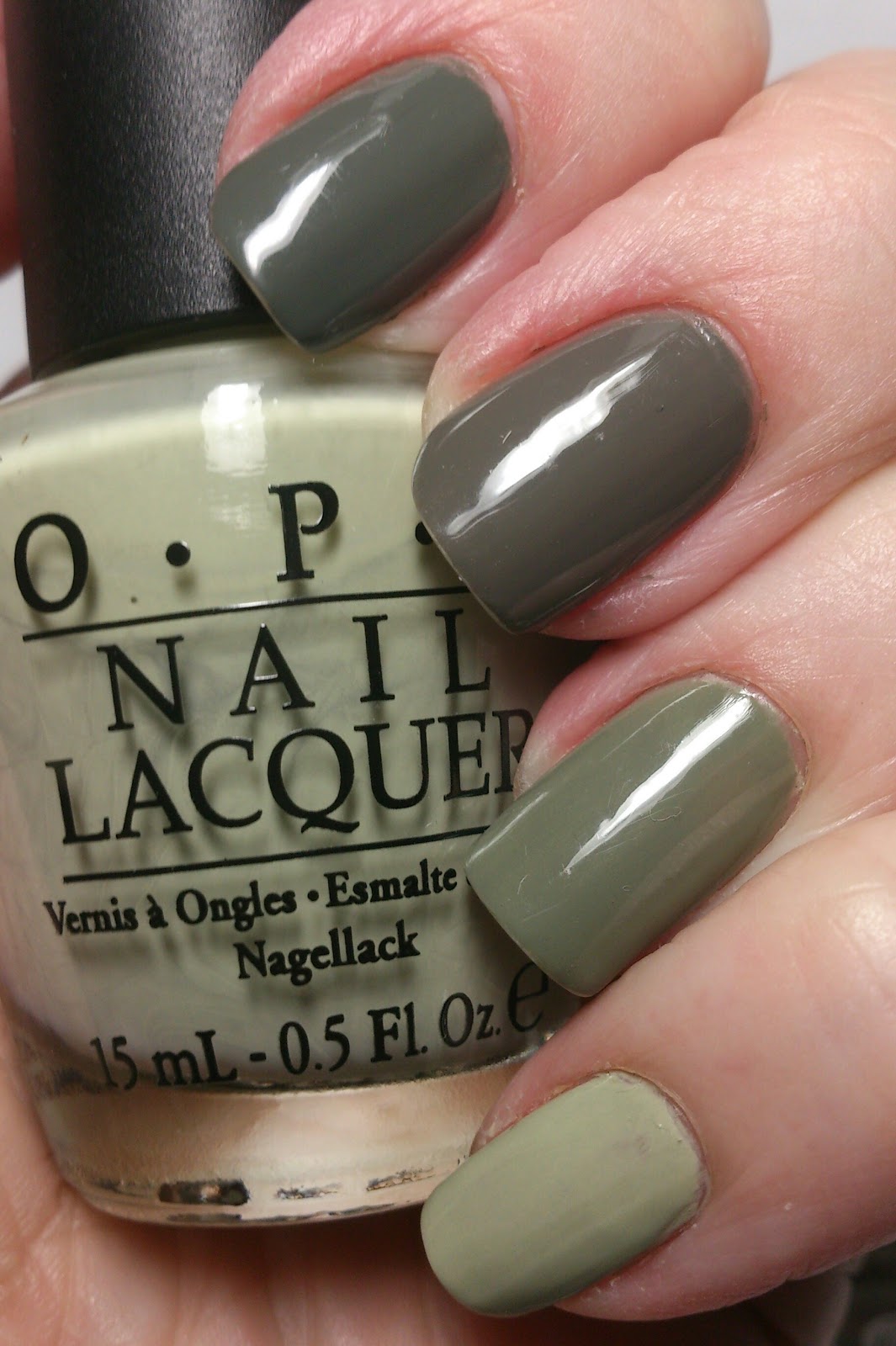 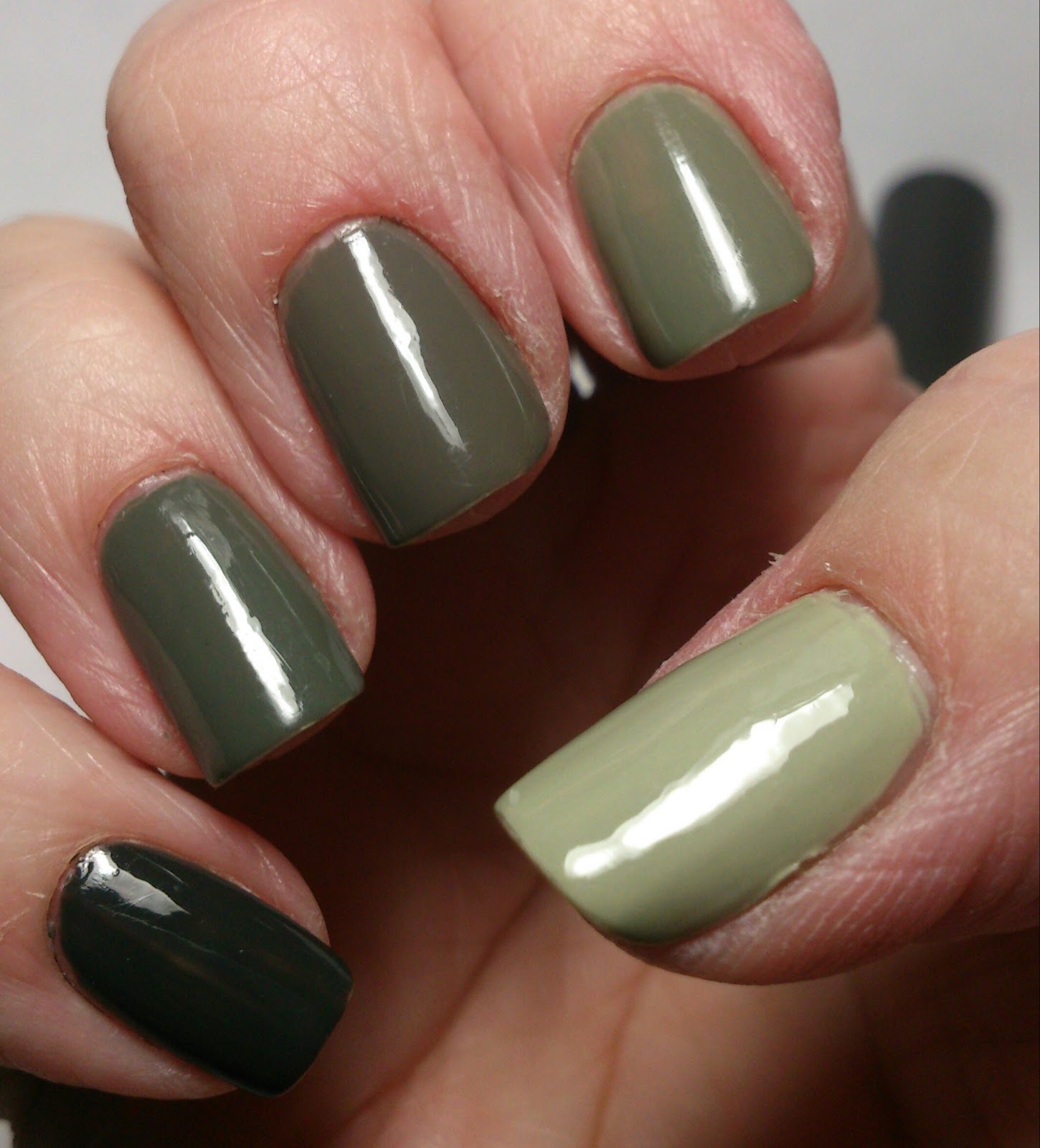 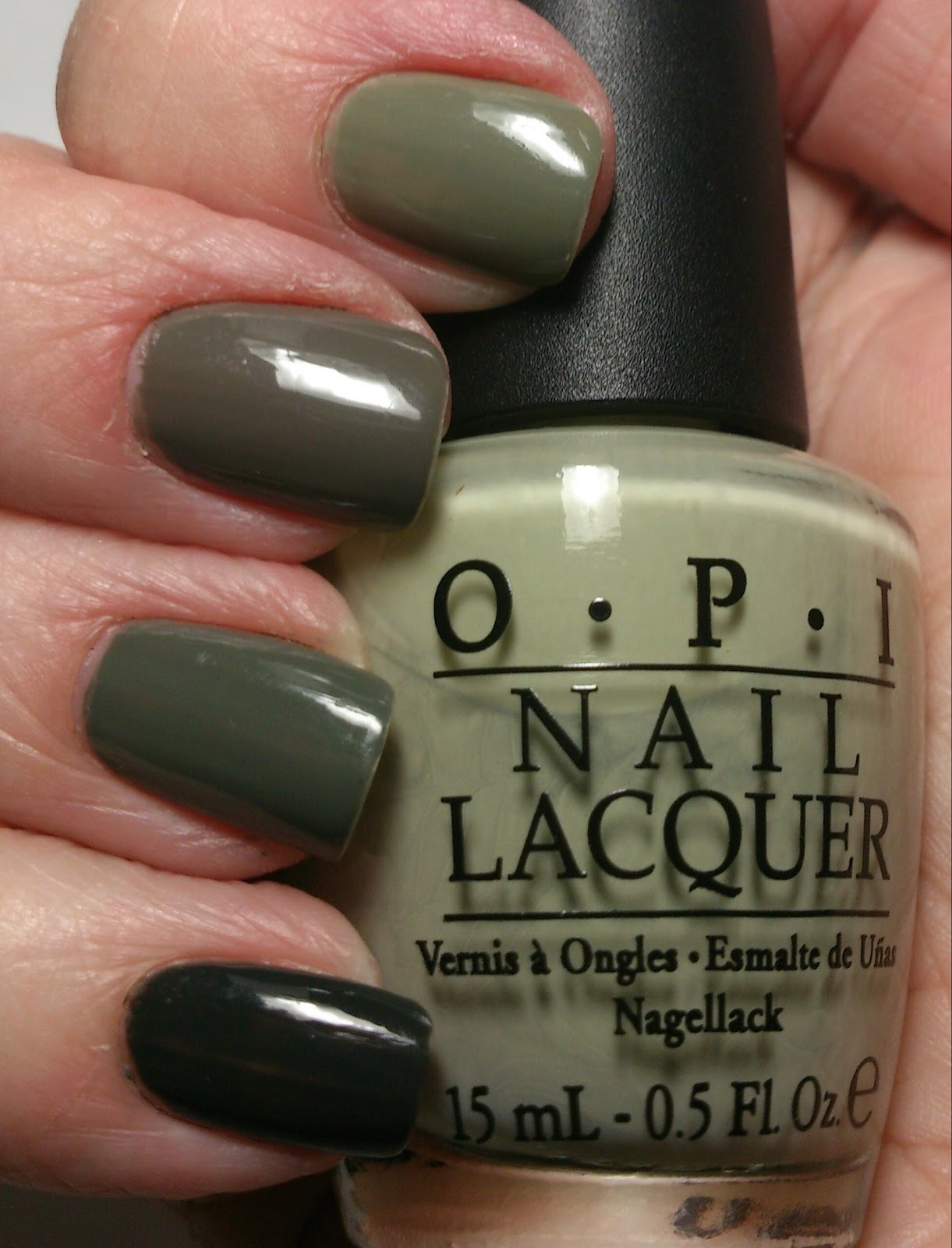 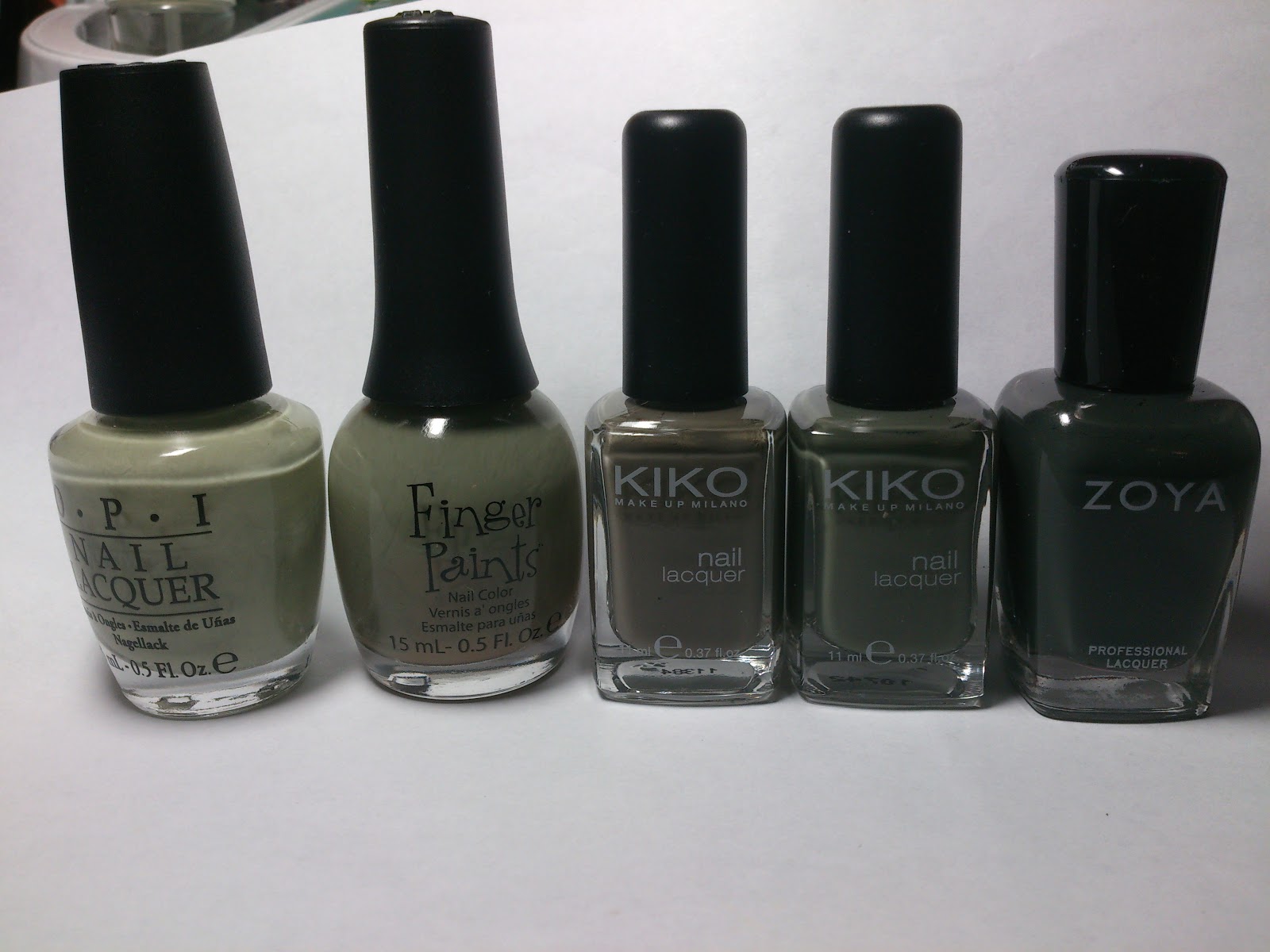 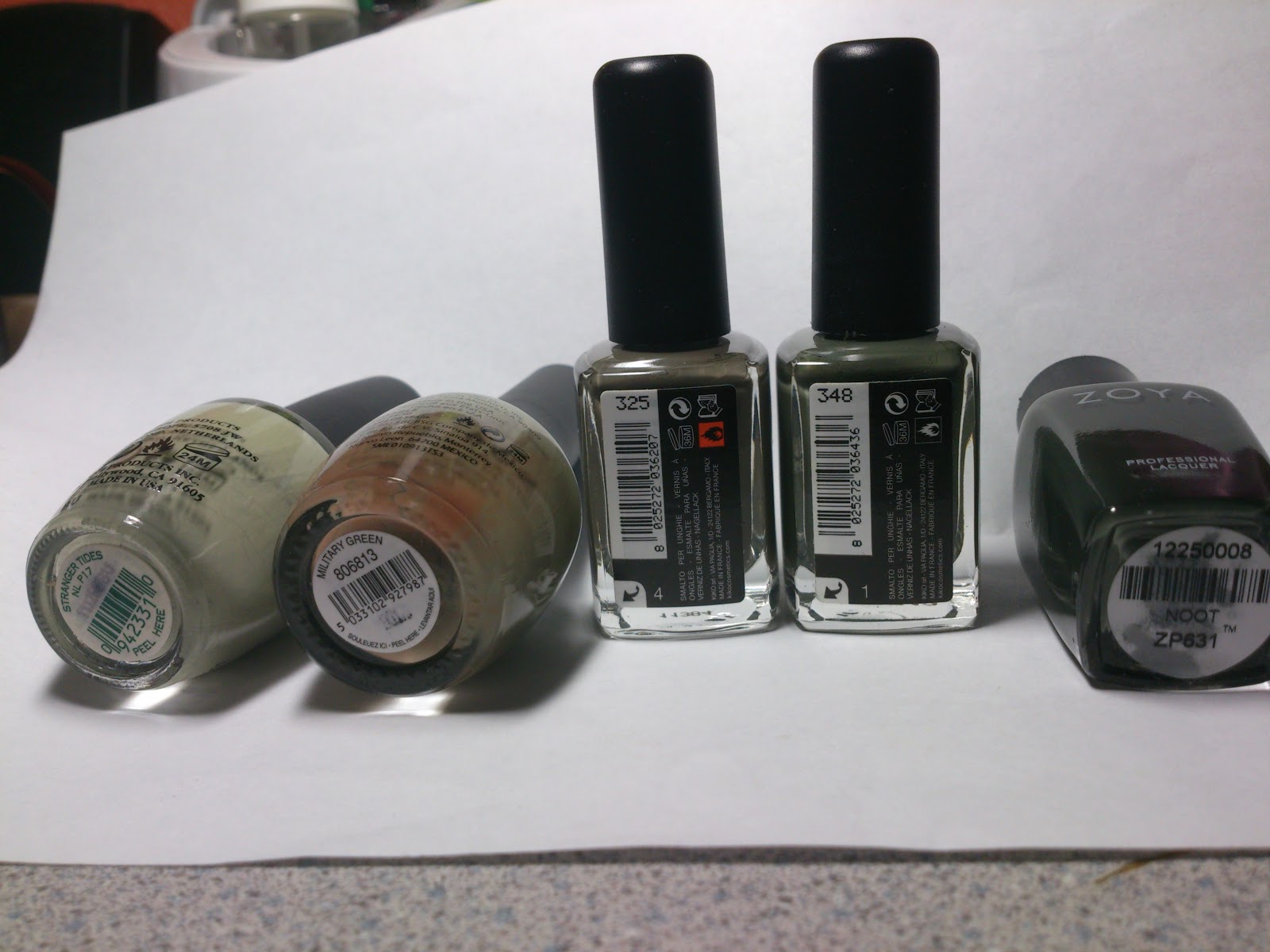 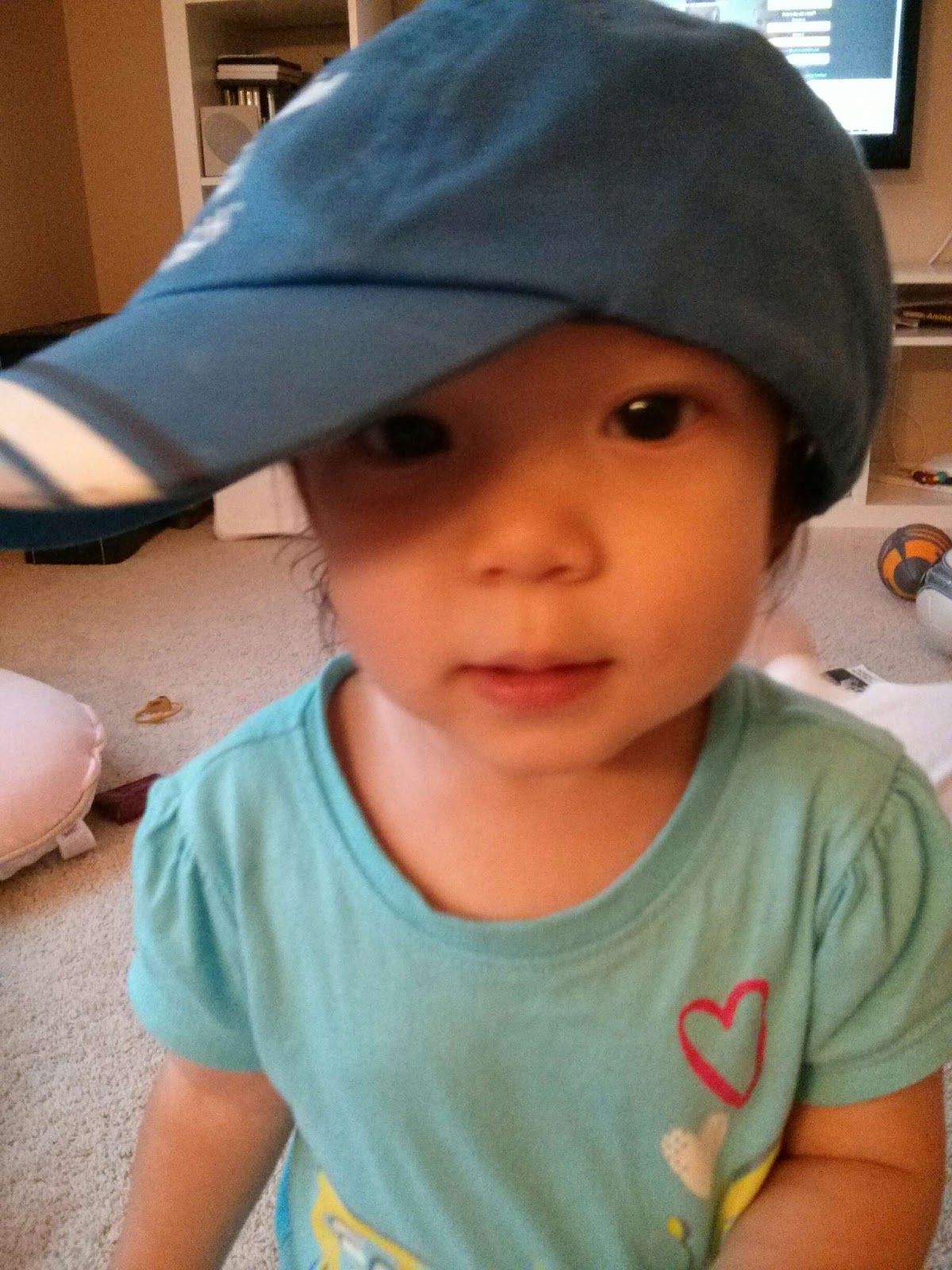 18 Easy Nail Art Ideas for Halloween
Posted by Elizedge at 5:47 PM No comments:

On a piCture pOlish Kick!

So my first Picture Polishes are all shades of blue green. Don't know how that happened, unless the blogger selling them decided they didn't like mint, or these are backups, whatever, I got them for a great price! I used the gorgeous Jade, a creamy pale turquoise with shimmer as the base and added dots of the darker Marine first, then Tiffany offset a bit to make scales, or bubbles. HK Girl topcoat. Loving this simple look. Jade took three coats for opacity. Probably some of the best brushes I've ever used, I needed almost no cleanup.
And because I'm not posting as often, here's a bonus pic of my son's girlfriends nails I did purple Packer penguins on. 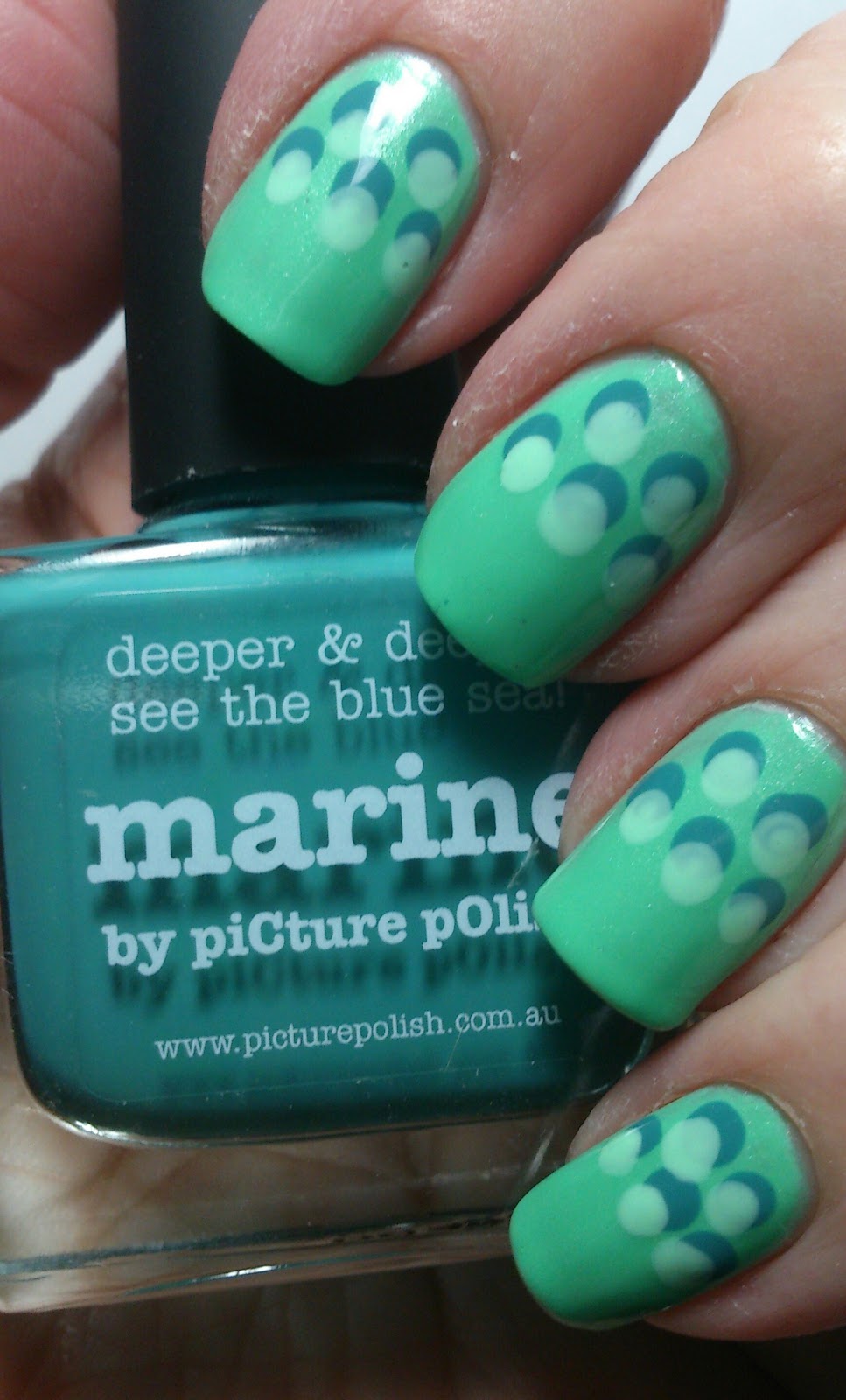 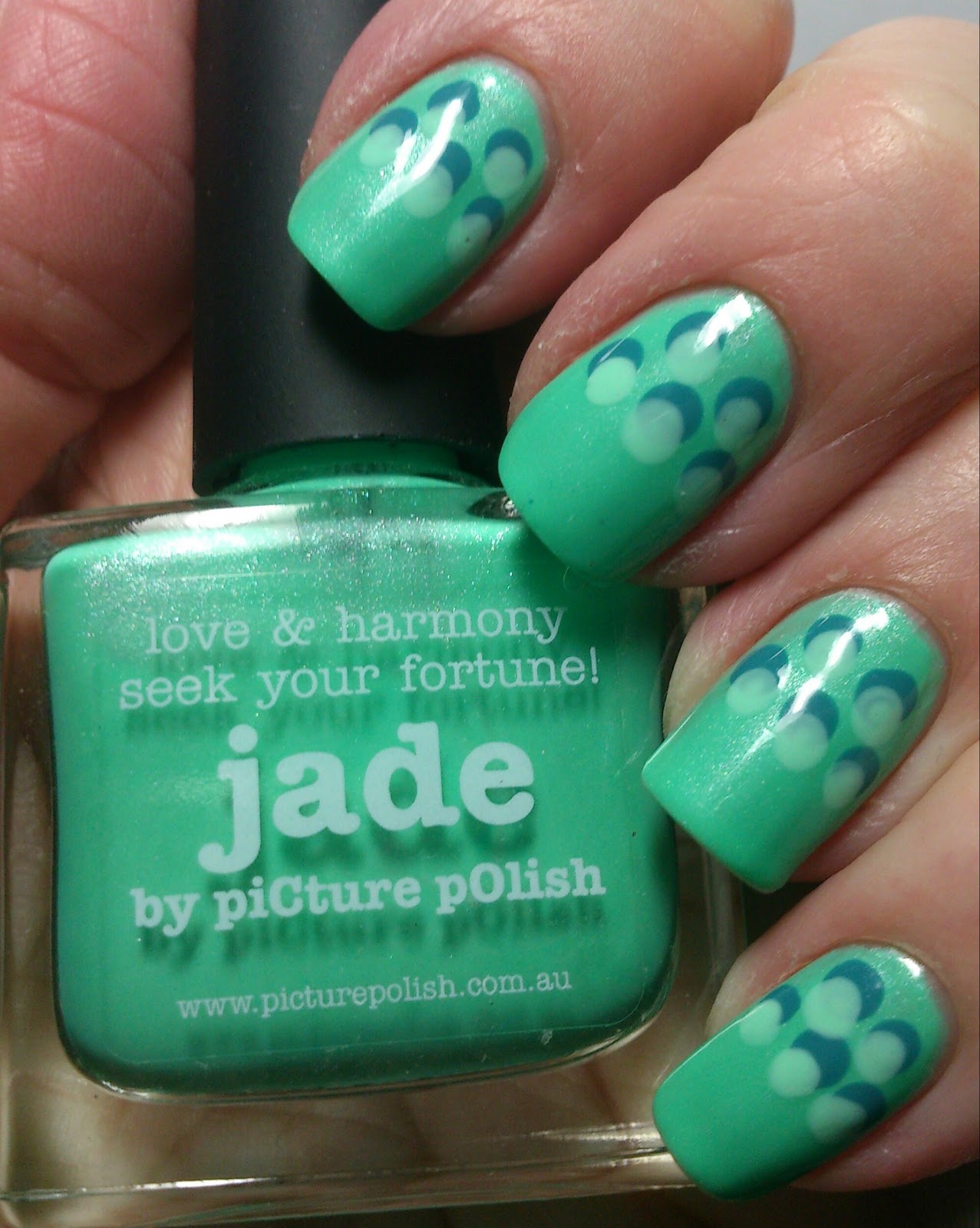 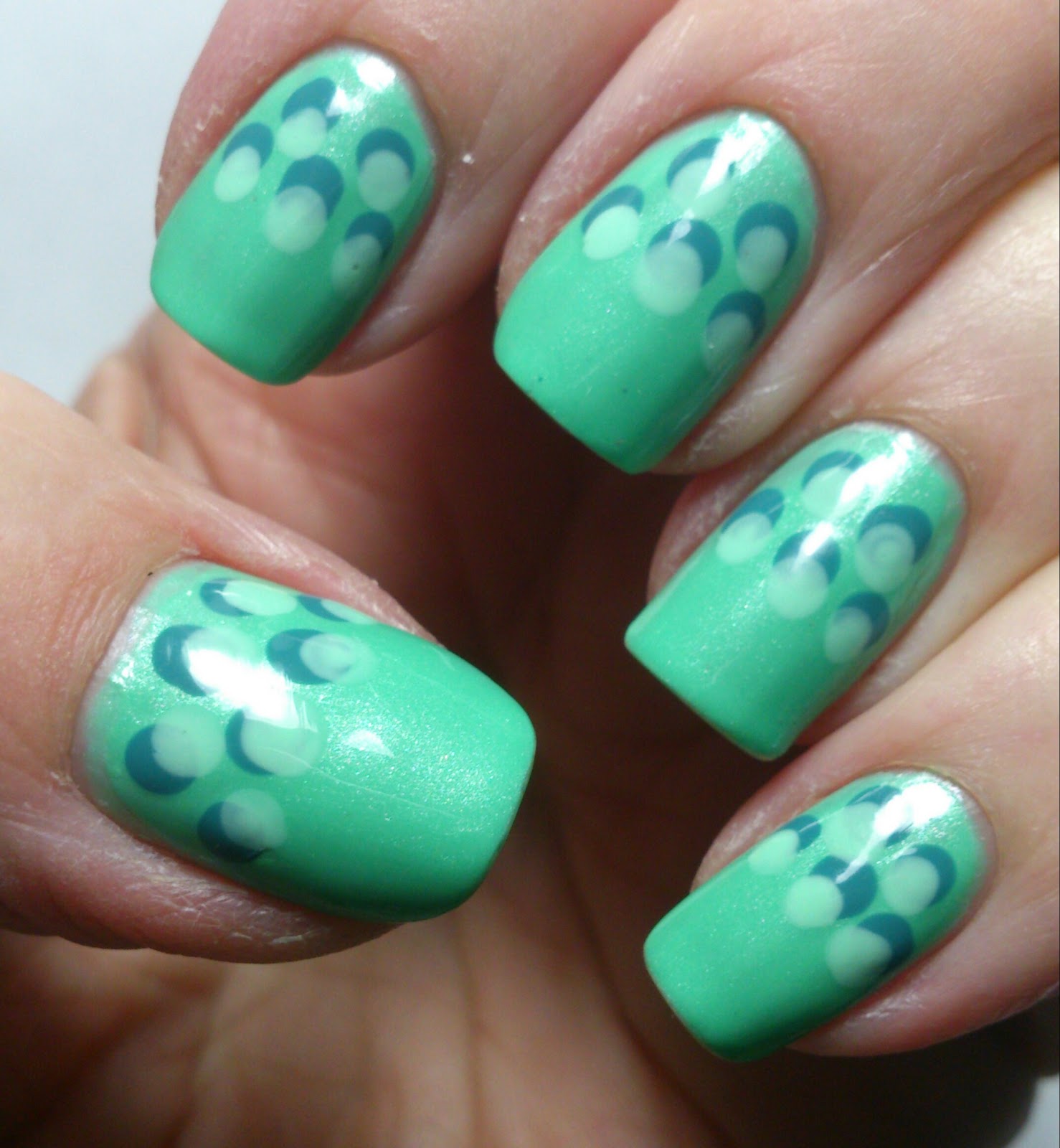 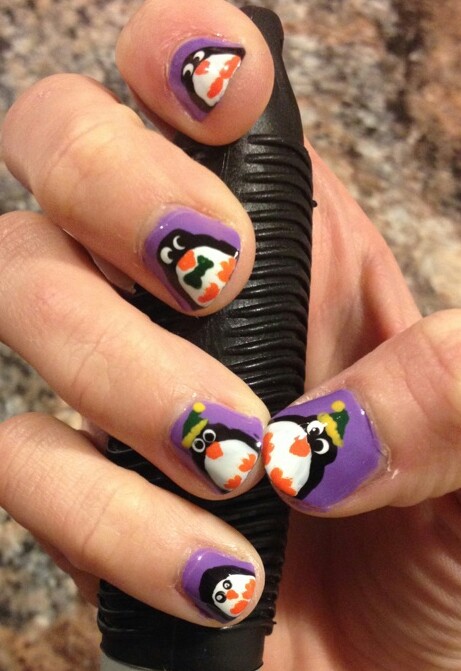 KB Shimmer A Touch of Glass and Spot Sign

Lovely pale/muted blue/seafoam color with a slight shimmer that doesn't translate to the nail. It does make it a bit translucent, so three coats were needed. I accented with Spot Sign, the love-it-or-hate-it "leopard" shaped glitter (depends who you ask). The glitter took three coats of Poshe to cover, so it's not an every day for me. I do really good animal prints with my dotting tools, so this is just a novelty- great for a quick design, and the spots and micro glitter/holo shimmer do make it very unique. The shapes are a dickens to get out of the bottle, so I recommend dabbing them on a sponge to place and help remove some of the clear base, otherwise you're drowning in it before you get more than two or three shapes. 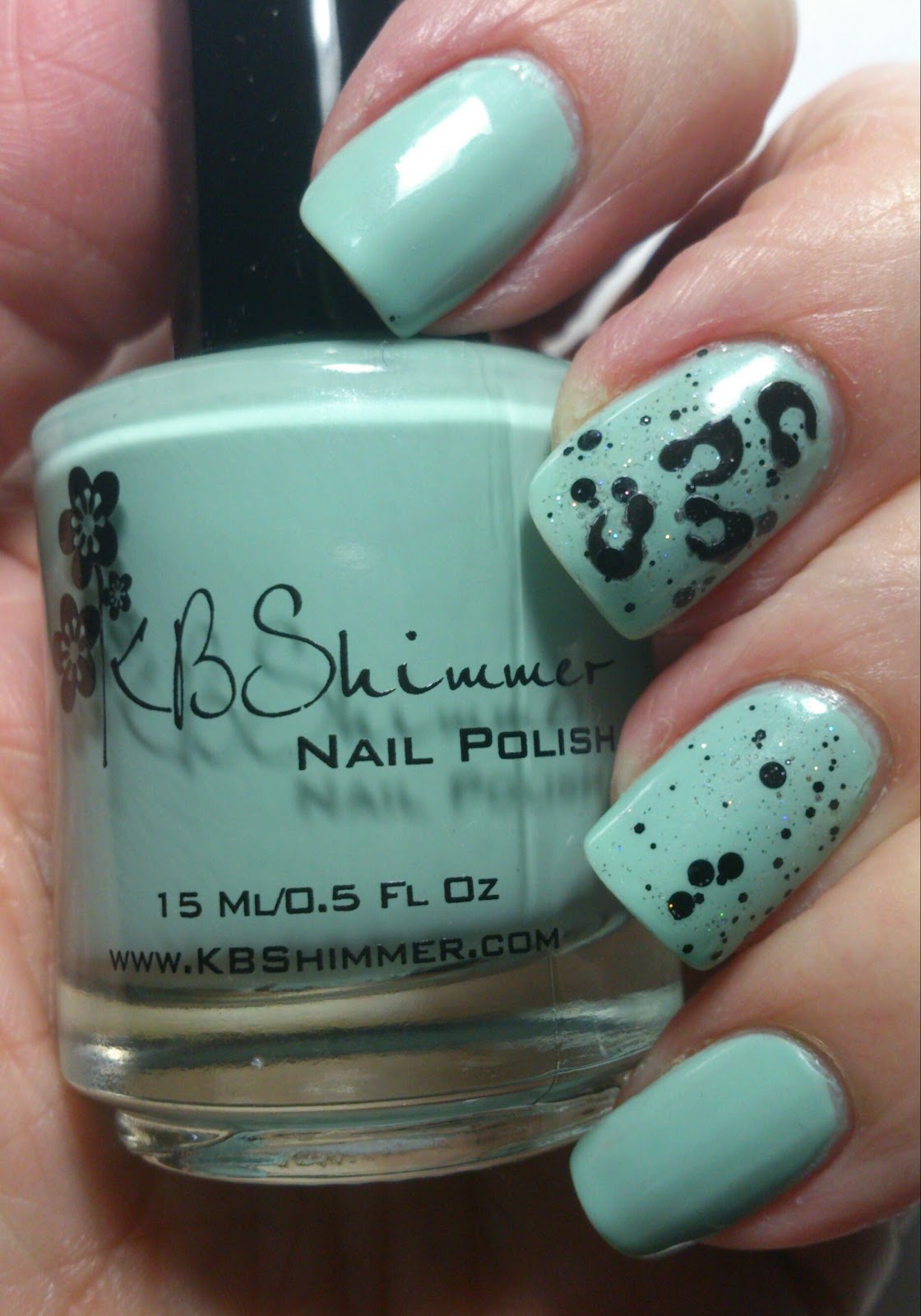 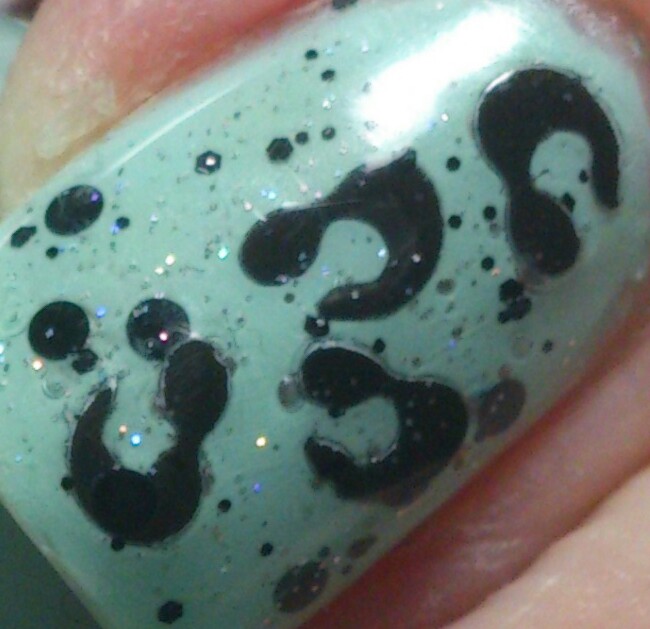 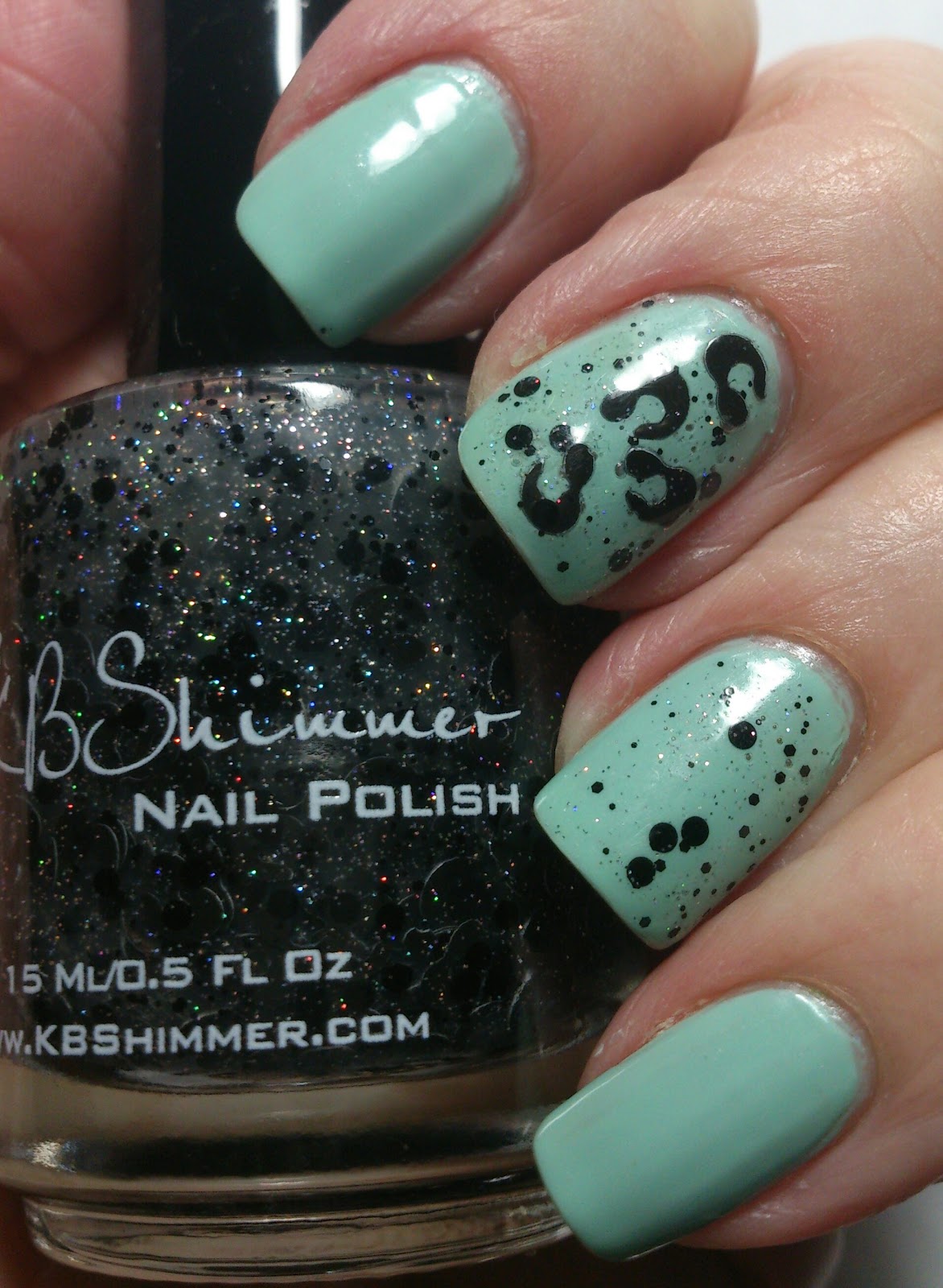 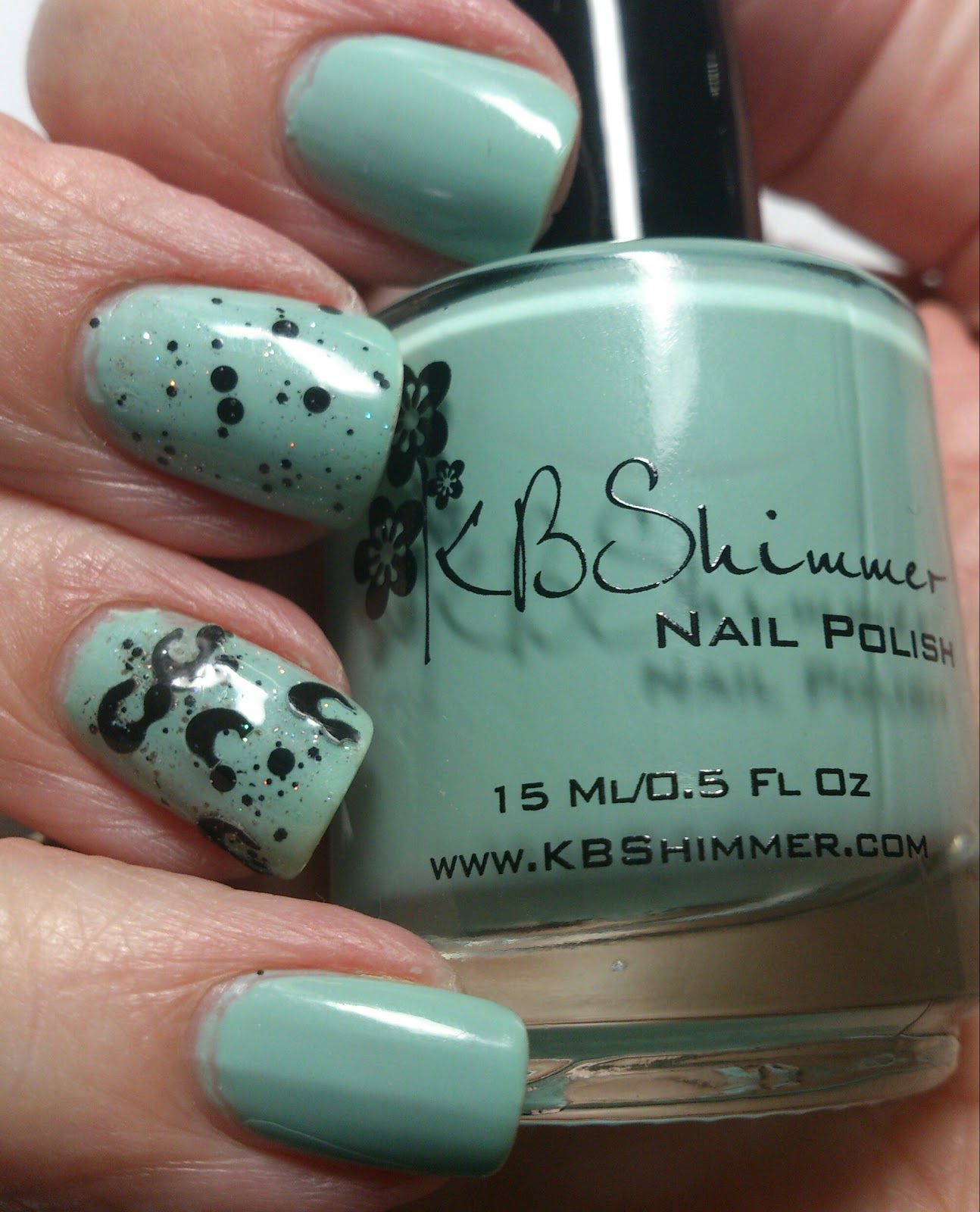 Oh Nerdlacquer.....Gorramit and The Eye

Feeling glitter today- been a long time since that happened, and with the restocks Amanda has been doing, I feel a little more comfortable using these polishes- not like I'm giving away the farm any longer. Gorramit was gifted to me by The Crumpet many moons ago, and it's still my favorite yellow, perhaps favorite polish. Red and gold glitters in bright yellow polish, yes please! I accented with The Eye, a red-orange jelly with red gold and a few larger black glitters.  Top coat hungry, Poshe and Gelous over. 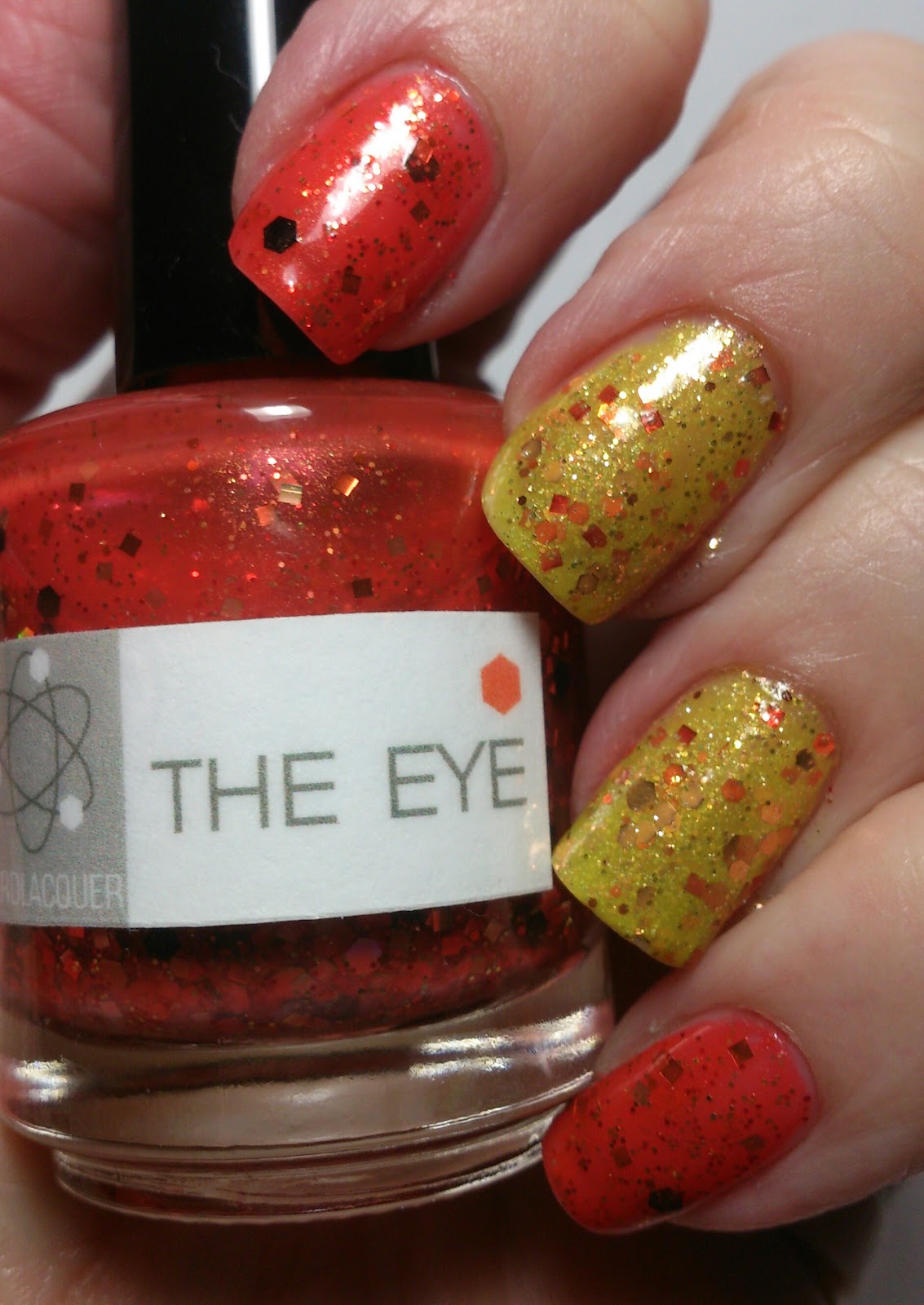 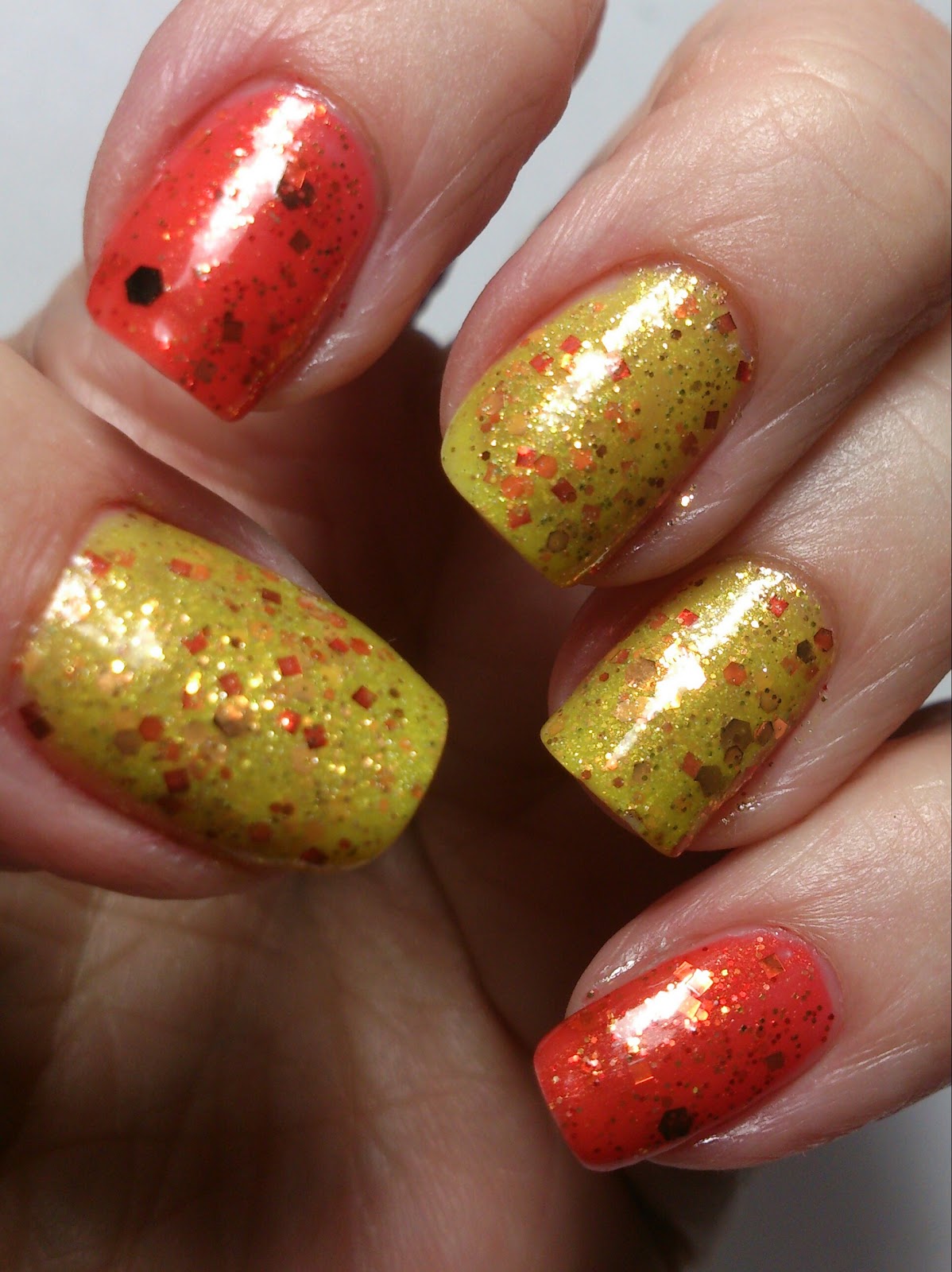 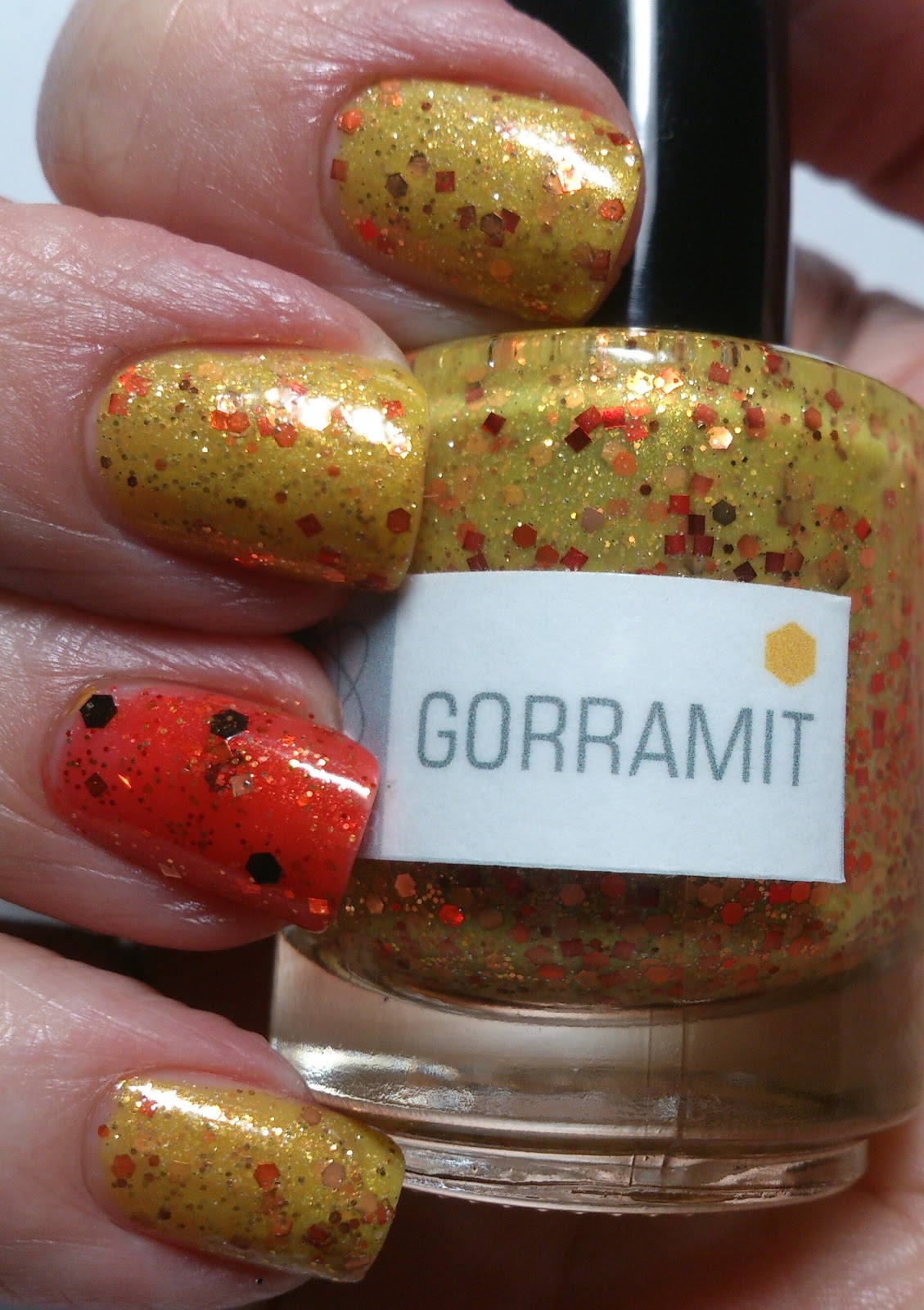 Copy That, CopyCat- inspired by a video- Nail Art Swirls

This video here of a nail art drag just looked so stinking simple I had to try it. Having a very big sad from not being able to get the Pipe Dream polishes, I dragged out my Bettina Resort collection along with a special OPI for the blue. Various combos later, I'm not too unhappy with my first try. I'm showing the right hand in the interest of full disclosure. Bettina Pro base a topcoats. 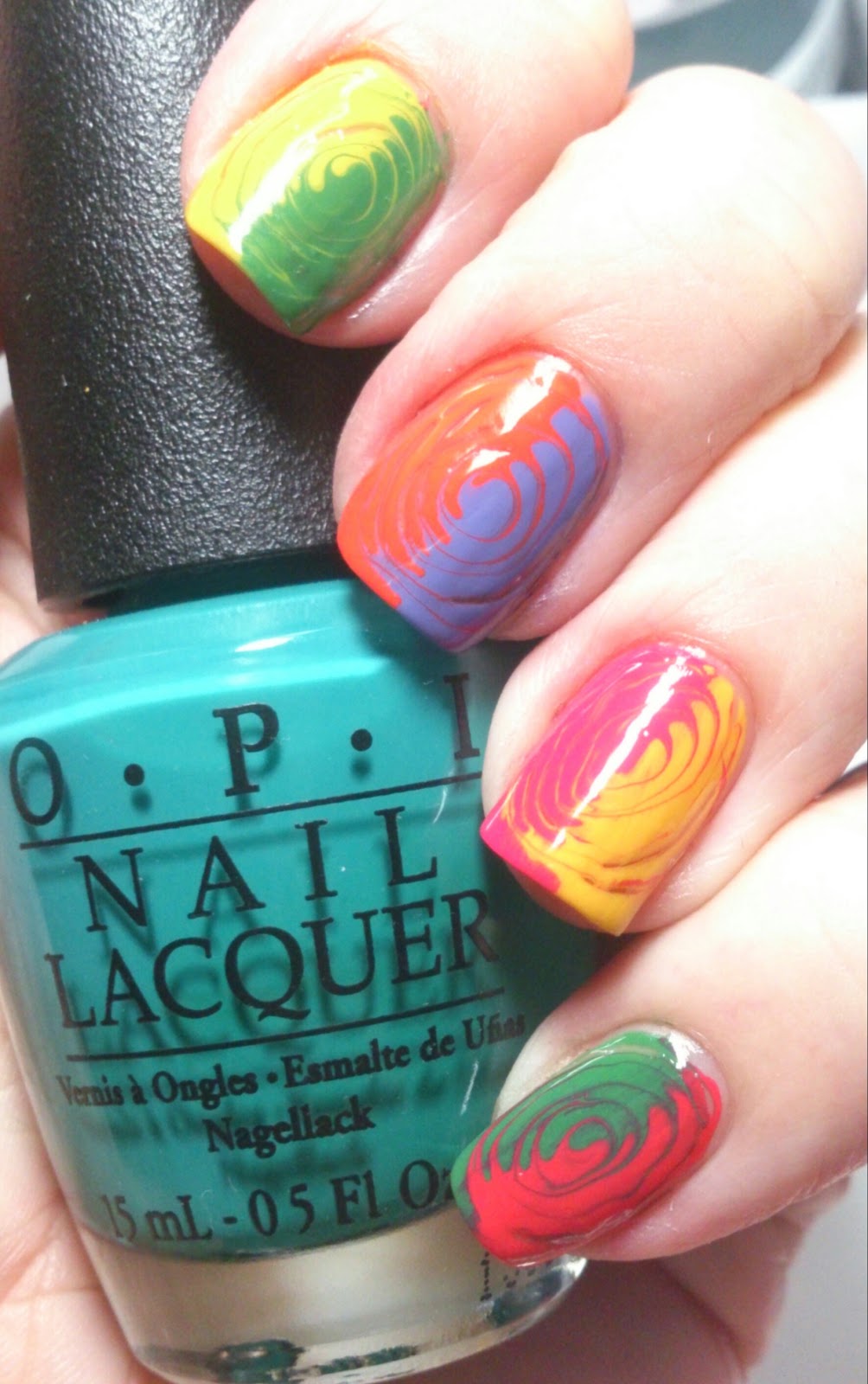 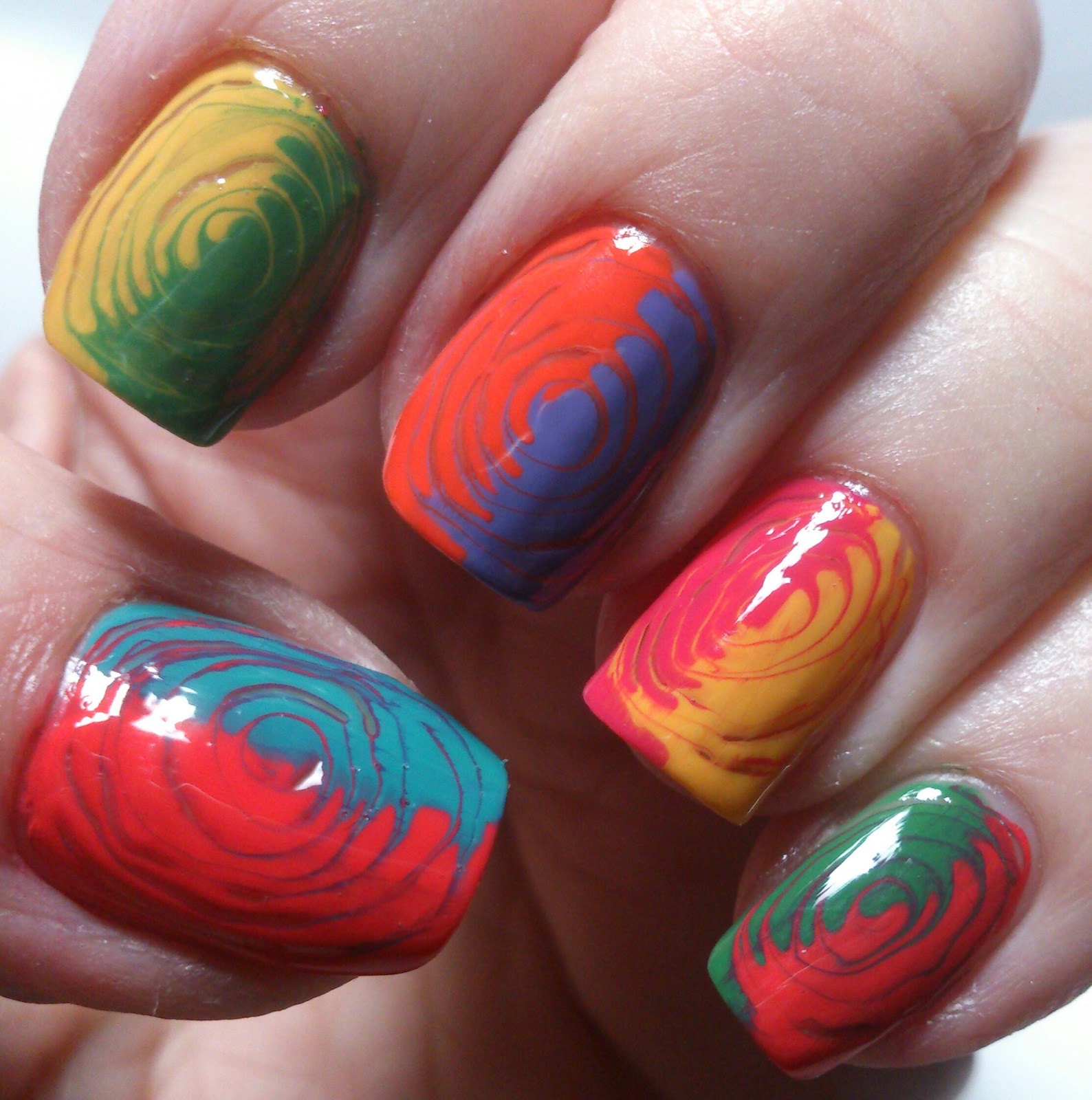 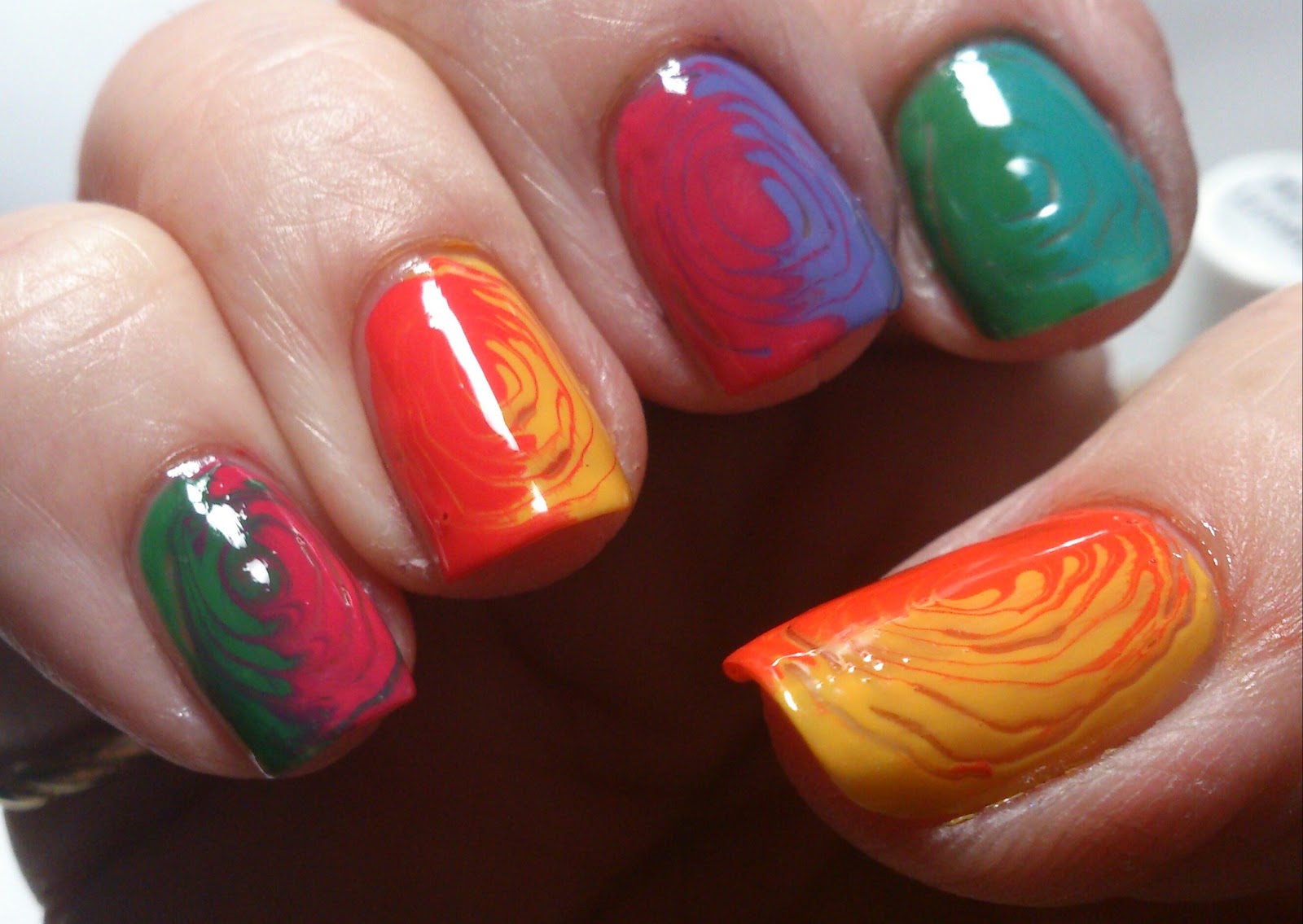 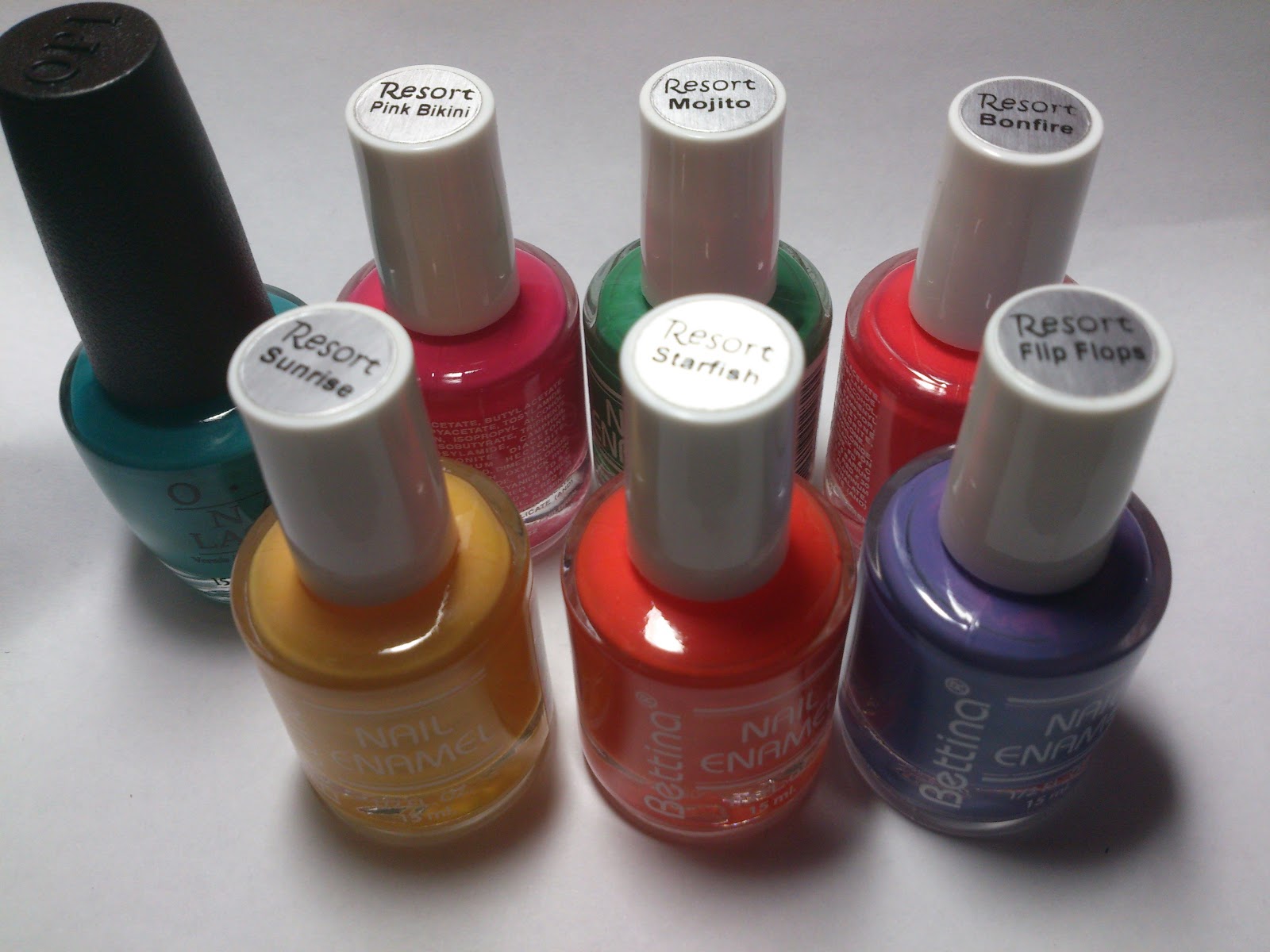 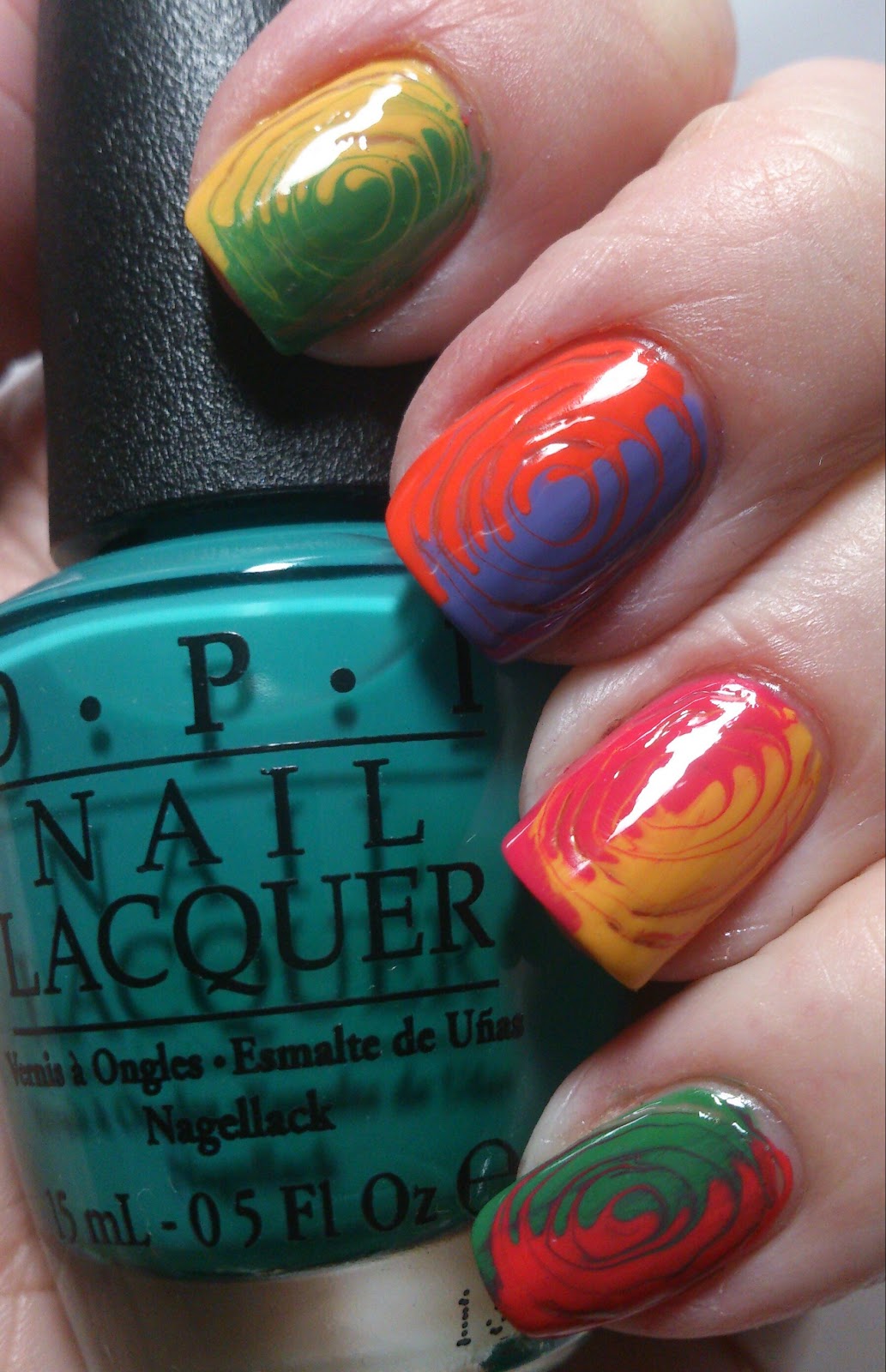 Sir Terry Pratchett is a literary pioneer. From his first book, The Carpet People in 1971, through his most recent 2014 release, Dragons at Crumbling Castle, Sir Pratchett continuously takes his readers out of their realities and brings them into new, fantastical worlds. His books (including those of Discworld, The Long Earth and everywhere in between) are an escape from the mundane, a thought-provoking journey and a study in foreign lands and experiences. Sir Pratchett's writings include fiction, nonfiction and fantasy for adults, young adults and children. There are several movie and radio adaptations of his works and a Discworld app, in which readers and fans can roam the streets and interact with its patrons. And at age 64, Sir Pratchett continues to delight readers with new works.
Literary Lacquers, founded by Amy Milder in 2012, is an innovative independent nail polish company . Amy's passion for literature, beauty and nail polish drive her creativity and business; all of her polishes are inspired by great literary works, passages and series. Literary lacquer polishes are all 3-free and are packaged and shipped with 100% recyclable materials (https://www.etsy.com/shop/LiteraryLacquer).
In 2007, Sir Pratchett announced to the world that he is living and writing with early onset Alzheimer's, or as he refers to it "The Embuggerance". Instead of ceasing his creativity and publicity, Sir Pratchett became a financial donor and guest blogger on Alzheimer's Research UK (http://www.dementiablog.org, http://www.alzheimersresearchuk.org), and continues to write and interact with fans via social media. Earlier this year marked the first time that Sir Pratchett cancelled a public appearance due to the effects of The Embuggerance.
To honor Sir Pratchett's work and his charity work with Alzheimer's Research UK, Literary Lacquers has designed a limited edition charity polish, Luggage For Your Journey. In the Discworld novels, The Luggage is a recurring character that travels, protects (at times voraciously) and accompanies the wizard Rincewind. The Luggage is otherworldly, and yet becomes integral into the fabric of Discworld. This polish is designed to honor Sir Terry Pratchett's amazing literary career, to thank him for the journey into other realms and to serve as a reminder that there is always a companion for life's many journeys.
The bottles of Luggage For Your Journey will be sold for $12 and $5 from each bottle will be donated to Alzheimer's Research UK. The polish will be sold as a preorder only from October 10, 2014 through October 17, 2014.
Posted by Elizedge at 6:04 PM No comments: